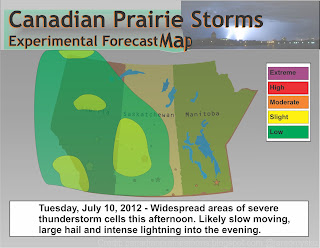 Update: Hail is not likely at all but heavy down pours are as air aloft is above freezing levels at 15k feet according to PSPC.

Severe thunderstorm watches have been issued for several areas this afternoon, including south east BC, Fort Simpson in the North West Territories, north central Alberta and western Saskatchewan. With the extreme heat and low surface winds, storms are expected to be slow movers, heavy down pours, flash flooding and intense lightning producers. Once the maximum heating is reached today, thing may change into the evening and we will update the situation as it happens. Night time cooling could cause some very large storms to emerge in any of these areas. Keep cool and pay attention to updated watches and warnings.

Also, be aware of the humidex advisory for central Saskatchewan, including Lloydminster, Saskatoon, Yorkton as the humidex will reach over 40C today. North Battleford, Regina, Estevan could all be included in the advisory as well as values are already hitting 37C at noon.