Extreme fluctuations in temperature are often a sure sign that a storm is brewing and this formula works its magic again tonight. Highs of +2C this afternoon will briefly melt some of the slush on the roads but this lovely weather we have experienced over much of the Christmas and Boxing week season take an ugly turn later tonight. Blowing snow warnings have already been issued in the south western areas of Saskatchewan in addition to the Special Weather Statement from Environment Canada, using descriptive words such as "Drastic change in the weather coming tonight." and "snow and rapidly falling temperatures" and "Holiday travelers should be aware that road conditions are expected to deteriorate throughout tonight into Saturday morning. Gusts could be as high as 70 km/h in the Cypress Hills early Saturday morning and localized blizzard conditions are possible there." also, "In the wake of this system, bitterly cold temperatures will prevail for the weekend"It should be noted that this system, known as an Alberta Clipper is currently tracking though central Alberta now and is coming from northern BC mountain areas where heavy snowfall warnings continue through that region. This is a slow moving but powerful system. Please take extra precautions when planning any travel this weekend. Be prepared for the worst and remember that the city areas usually do not feel the full effects of these storms but as soon as you get on the highway it can go from light snow to zero visibility and black ice. Do not venture out onto highways during blizzard conditions, it is not worth the risk. Keep up to date with the latest watches and warnings from Environment Canada and STAY SAFE!

Now that I am back from lake having spent the Christmas season with family there, I want to share some of the footage from that area in north central Saskatchewan. The snow is very deep in drifts due to constant blowing snow but for the most part, snow depth is average, much less than last year. 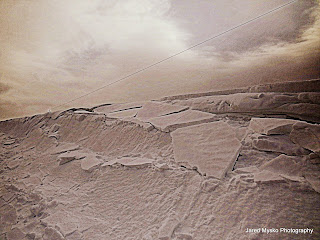 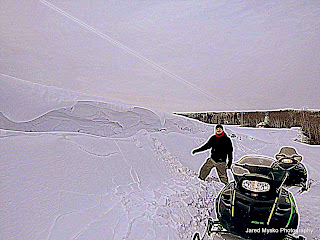 Here is a 28 day time lapse video from the wildlife camera, notice the temperature change from -2C at the beginning of December to -36C upon arrival before Christmas. Amazing that it survived the harshest of conditions for a month straight!

Posted by Jared Mysko at 3:13 PM No comments:

Northern Saskatchewan is holding the title today for the coldest places on Earth with the top 3 being Southend -43C (which is actually far north, no idea who names these places) Stony Rapids -45C and Uranium City -43C (which is really not a city lol). Luckily windchills are limited to a calm breeze but feeling like -51C.

As the extreme cold pushes south from the arctic, warm moist air is moving north east from the Gulf of Mexico. This is causing havoc across much of the eastern states and into eastern Canada with ice storms from Oklahoma to southern Ontario and severe thunderstorms south and east of that line. A Moderate Risk has been issued and tornado watches have been posted for many areas including eastern Texas into Louisiana.

Some tweets from the ice storm in Oklahoma:


I stop to break the ice off the truck. New data has a lot of QPF from SW- NE OK over night major ice storm.#okwx pic.twitter.com/rKzhUWvz8b
— Jeff Piotrowski (@Jeff_Piotrowski) December 21, 2013


Large, iced up limb comes crashing down while I'm taking pics of tree! Glad I was not under it. #okwx pic.twitter.com/hhvOZqNJfc
— JR Hehnly (@stormchasing) December 21, 2013

Environment Canada has just confirmed the first blizzard of the the season for southern Alberta today. A major snow storm system is crossing the prairies bringing heavy snow, high winds and cold temperatures from north west Alberta, it is forecast to cross into southern Alberta and southern Saskatchewan tonight. Monday and Tuesday the heavy snow will affect southern Saskatchewan and southern Manitoba. Fog and freezing rain ahead of the storm front has made highway travel extremely dangerous and this situation will only get worse with 10 to 20cm of snow (possibly above 30cm in some areas) with above 60km/hr winds and temperatures near -20C (windchills will be below -30C).

Currently the Trans Canada Highway is closed between Mortlach and Chaplin, Saskatchewan.
Check the Highways Hotline before any travel of just STAY OFF THE HIGHWAYS:
http://www.highways.gov.sk.ca/road-conditions

Near Maymont yesterday due to thick fog a 20 car crash injured 40 people and sent 13 to hospital.
CTV Saskatoon

Stay updated by checking warnings and watches from Environment Canada

I will continue to post photos and video as things progress here in Regina and remember to follow our twitter feed of storm chasers, spotters and weather sources.

Here is a couple little video clips of the fog in Regina yesterday morning from our sky cam:

Current Skycam View as of 1pm:

Posted by Jared Mysko at 1:14 PM No comments: