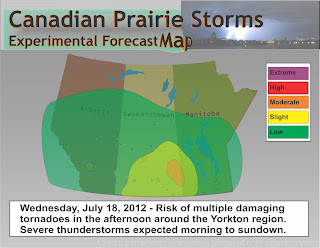 Forecast models have been suggesting that Wednesday will be the day for a possible outbreak of severe weather in southern Saskatchewan and PASPC confirmed this earlier today, issuing a "Moderate Risk" for several tornadoes and severe thunderstorms in south east Saskatchewan, especially around the Yorkton region. After pouring over the latest models and forecast observations, it looks like storms will begin near midnight tonight and come from the south initially, growing in strength as the night turns to morning. A split occurs just after noon Saskatchewan time. This is similar to the June 26th event where we easily caught up to a growing tornadic cell west of Moose Jaw, filming 2 violent tornadoes and witnessing a 3rd rope tornado at extremely close range. The only major difference is that it seems to completely die off at sunset near 9pm without a following squall line. In conclusion, the most dangerous cell should initiate somewhere between Regina and Yorkton around 1pm and split into several tornadic supercells, growing one by one towards well north of Yorkton and moving south east. The cells with the most distinguishable right turning action that do not move north but race east will be the most dangerous. We will continue to monitor and update the situation here as things develop. The next major update will be around 8am and the map will likely be upgraded at that time. Take this time to contact loved ones, secure property and make a safety plan!
Posted by Jared Mysko at 6:37 PM

I wish I could make it out that far tomorrow. Hope you get another great video!!