The next 7 days will be very busy for storms on the northern plains and Canadian Prairies. Alberta and Montana will see action on Monday, Saskatchewan on Tuesday and Manitoba/North Dakota on Wednesday. Conditions conducive to the formation of severe thunderstorms increase dramatically on Saturday as southern Saskatchewan and North Dakota could see the first major outbreak of the year for this region. Stay tuned to forecasts and heed all warnings. The 2012 storm season is now officially under way here as the southern plains start to calm. April to May is the busy time for storm in the southern plains while from June to August, the focus shifts north into states such as Montana, North and South Dakota, Minnesota and the prairie provinces of Alberta, Saskatchewan and Manitoba. Also of note, the full moon has just reached its peak and statistics show that most catastrophes occur in the following 4 or 5 days after the full moon as its gravitational pull weakens and drops ocean tides. In other words, what goes up, must come down.

As always, stay safe and respect the weather. 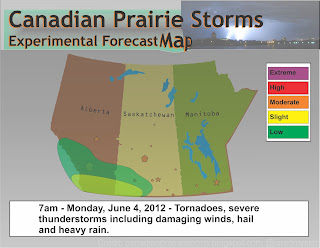