As expected, severe thunderstorms have begun in the central Alberta areas around Edmonton and have begun to creep into west central Saskatchewan. Forecast models have done some shifting north for this system. Here is the latest risk map for tonight. Storms will calm down overnight and re-fire into a full blown outbreak in Saskatchewan Thursday, see graphics below: 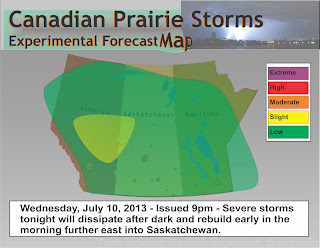 Another update for Thursday as forecast models are continuing to suggest a very significant severe weather outbreak throughout the province of Saskatchewan. Areas of Manitoba have been dropped for the morning and afternoon storms and may not get much until Friday according to the latest model runs. A risk of a tornado near noon in the La Ronge area of north central Saskatchewan and supercell thunderstorms across most of the south and central areas will increase in strength as they move east. This large complex of storms will spread across the province in the largest of swaths from north to south. Later in the evening around 8pm will see the tornado threat reach maximum danger level in areas around Yorkton. 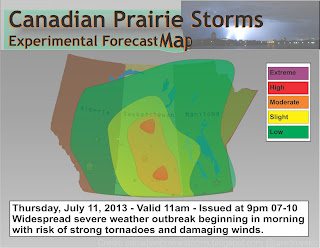 Please stay tuned for updates and follow official Environment Canada watches and warning with the utmost respect and STAY SAFE!
Posted by Jared Mysko at 9:15 PM