After several days of storms staying put in the mountains and foothills of Alberta, the system finally moved on  into Saskatchewan this morning. Being pushed by extreme heat in the west, Val Marie currently sits at a cozy 35C while Regina is right in the humidity soup at 23C. Extreme instability is now present over eastern Saskatchewan and storm cells the north are beginning to emerge. Over the next few hours, watches should be issued and a risk of a tornado is possible between the Yellowhead and Trans Canada highways in eastern Saskatchewan. The cities of Regina and Yorkton are included in this risk however unpredictable weather can be as we get closer to hurricane season in the Atlantic Ocean. Hurricane often suck all of the elements of storm action from Saskatchewan giving us very calm and moderate weather. Today will be different. 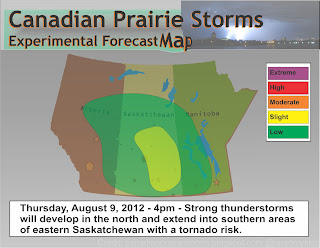