As forecasters yet again predicted thunderstorms for south central Saskatchewan, the weather decided it wasn't finished with Alberta. Yet another round of severe weather crossed the Albertan foothills through Olds and passed Calgary with a target set on Brooks at this hour. After anticipating thunderstorms this afternoon over Regina either late this afternoon or evening, things have shifted so far west that it doesn't seem likely we will hear thunder until maybe late at night if at all in the Queen City. A large mass of cloud cover prevented any heating or convection to occur in southern Saskatchewan while Alberta gets hammered once again by strong thunderstorms. 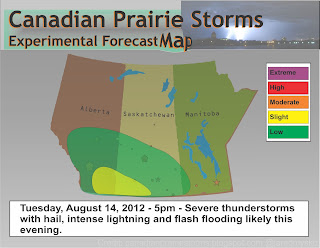