Strong storms are expected to fire up early today before noon across much of southern Saskatchewan. This includes a low probability of tornadoes, 2% in the Regina area and 5% along the international border. There is some dispute among forecast models with the NAM calling for a more widespread event from the Yellowhead Highway south and into Manitoba while other models are saying storms will be confined to south of the Number One Highway in Saskatchewan. The undisputed biggest risk remains further south into the Dakotas where SPC is calling for an "enhanced" risk with a large area projected for tornadic action.

The main focus here will be in southern Saskatchewan as many areas could be hearing thunder and seeing large dumps of rain. Possible flash flooding locally and small to moderate sized hail. Damaging winds are not expected but can not be ruled out in stronger cells with the odd weak tornado. If anything, stay up to date with current advisories and watches, keep weather radios and cell phones charged, and always be prepared! 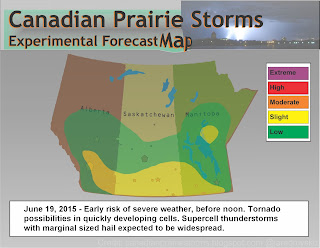