After severe thunderstorms battered parts of eastern Saskatchewan including areas of the Quill Lakes and Yorkton regions, supercells have pushed into south west Manitoba and are rapidly dissipating. Models suggest these storms will not go much further overnight. Tomorrow, the risk moves into southern Manitoba and another system will begin in Alberta. Friday looks to be the most active in south central parts of Saskatchewan. 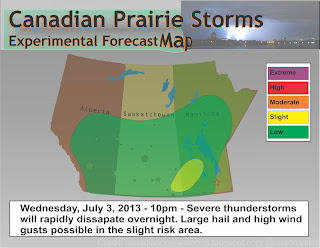