This 30 day java powered image loop of snow cover data over the past 30 days, distinctly shows Montana and southern Alberta drying up as the north-eastern American states begin to get fully covered by snow:

Animation of North American snow cover for the past month

Here on the Canadian Prairies, the depth of snow is shown in this graphic: 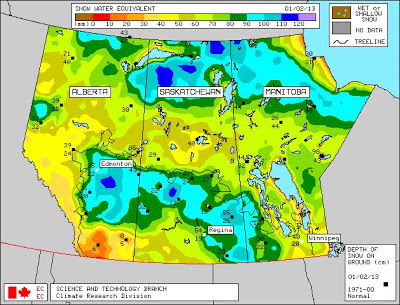 As of 01/02/13, snow depth appears to be greatest in a line from Estevan to Edmonton, east central Alberta, central and south east Saskatchewan. Surprisingly, the data for around the cities of Regina and Saskatoon seem to be opposite of what appears on the map. The city of Regina clearly has much more snow than Metro Saskatoon, yet the graphic suggests north west of Saskatoon has the largest snow depth. This is always a very important detail to factor in when predicting severe weather in the spring and summer as it can point out areas of major pooling of ground water below the surface than will not show up in computer meteorological forecast models. I'll be checking this data as it becomes available, likely once a month until full melt and spring flooding begins.