1pm Update: Severe Thunderstorm Watches have been issued and storms are emerging along the International border. Initiation is expected to occur for severe thunderstorms in the triangle of Yorkton, Regina and Brandon. 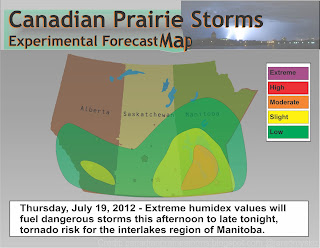 Humidex advisories have been issued for much of eastern Saskatchewan and southern Manitoba. Values are expected to reach 43c in some areas. This factors into the extreme CAPE values, which are now off the chart, beyond maximum measurements in southern Manitoba. The humidex advisory area stops at Regina, where temperatures fall off and severe thunderstorms are added to the local forecast. A slight to moderate risk has been issued by the Prairie Arctic Storm Prediction Centre in south eastern Saskatchewan and southern Manitoba. Currently storms are emerging at the USA border with Manitoba where SPC there has a slight risk with 2% tornado risk. This risk increases slightly further north, in an area between north of Brandon and Winnipeg, south of the interlakes region.