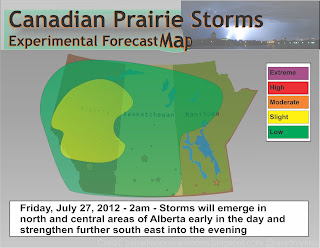 North and central areas of Alberta will see storms begin to filter through the Rocky Mountains of BC and onto the Canadian Prairies. These storms will begin as scattered mini cellular storms with hail and heavy rains the main feature. A supercell with tornado potential can not be ruled out later in the day around Red Deer but for now it is expected to be large hail as the main problem. These storms will strengthen overnight moving south east into southern Saskatchewan where a severe weather outbreak is possible Saturday night. Sunday could see yet another increase in storm energy over areas of Winnipeg and west into south eastern Saskatchewan. The whole scenario seems to repeat itself Monday through Wednesday with temperatures reaching above 30C, storm potential will be very high. This situation is being monitored very closely. The possibility of chasing over the next few days is being strongly considered since the season is now peaking. The chance of seeing a tornado dwindles dramatically after the first week of August so this could be the last or second last chance to intercept a supercell, lightning show or tornado. After seeing the video of near baseball size hail near Cardston, Alberta last night, we will have to be extra careful in case of any surprises. Storms can get very very dangerous at this time of year.
Posted by Jared Mysko at 2:27 AM