This is one of many lighting shots taken just after the storm passed by after midnight that caused a huge blackout and damage claims by SGI of over 500 to vehicles in Saskatchewan's lake country. 104 mm hail was reported by the Saskatoon Star Phoenix at Waskesu Lake which is just north east of Pratt Lake. Our canopy was ripped off the trailor and we found three large trees downed across one of the the roads in the area. After a couple days of extreme heat, this storm brought severe lighting and extreme wind. The straight lined winds were at least 100km/hr in our area but only lasted about a half an hour after midnight before calming to about 70km/hr with heavy lighting. This was the worst of 3 storms in 24 hours, the first earlier in the evening of Monday, July 18 was the tornado warned storm just to our south. Another storm around 4am cut power for 12 hours the following day for most of central Saskatchewan. This was an incredible adventure at the lake for sure! 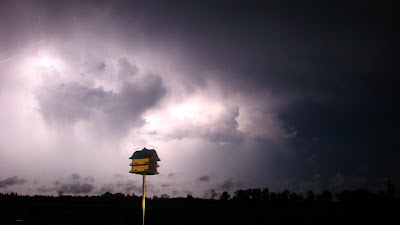