Saskatoon Gets A Close Shave

Sunday afternoon, July 16, 2017 storm energy was high across much of the province of Saskatchewan and tornadic potential was imminent. The 7am thunderstorm outlook issued by PASPC indicated a huge area to watch for strong storms across central Saskatchewan. 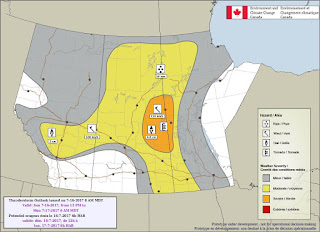 By 2pm it became clear that the risk had shifted well west of the original area of east central Saskatchewan as a massive supercell cluster had become severe thunderstorm warned in the Meadow Lake region. One lonely cell appeared west of Biggar at 2:10pm in a clear area between the rain complex to the north and extreme heat in the south. Only 20 minutes later that cell exploded to nearly reach maximum heights and severe thunderstorm watches were issued shortly there after. 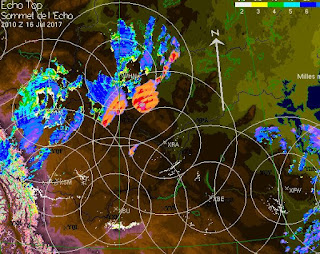 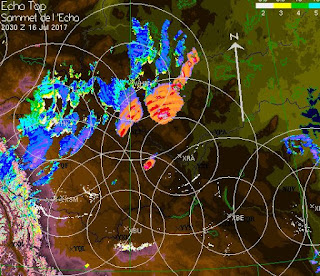 As the afternoon Severe Thunderstorm Outlook Map was being built at that time, Saskatoon and area was added to the Moderate Risk area in orange. 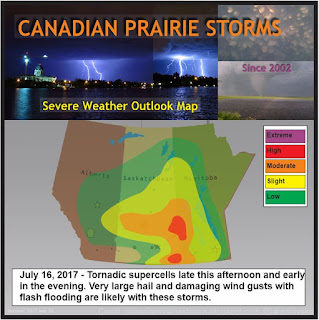 Areas north east of Yorkton indicated the highest potential for severe thunderstorms by the forecast models but ended up not panning out. Later at night a strong supercell was creeping along the US/Manitoba border, helping to verify the high risk in that area. The main event ended up being between Biggar and Saskatoon late in the afternoon as tornado watches and warnings were issued between 4 and 6 pm. There was some severe sized hail and rotation indicated by radar but luckily no tornado touchdowns. The storm structure was absolutely jaw dropping. Here are a few Tweets from this event:

This is a textbook tornado scenario. Next in the line of fire...Aberdeen, SK #skstorm Not a drill. pic.twitter.com/VsnuPcWEGZ
— Greg Johnson (@TornadoGreg) July 16, 2017