High Risk Verified - Monday Expected to Be A Big Day

A high risk for severe thunderstorms was issued early Sunday morning for western Alberta with a chance of tornadoes and extremely large hail. 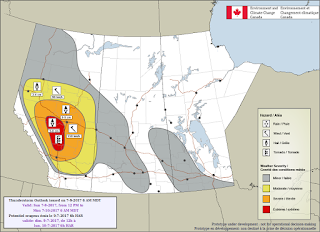 By 5pm one tornado was confirmed and reports of tennis ball sized hail were included in multiple tornado warnings throughout the evening, from Rocky Mountain House to Drumheller, Alberta.

Storm continue to maintain maximum strength late overnight and by 11:30pm cells began to quickly pop up in western Saskatchewan. Here is an image grab of echo tops radar and lightning at that time: 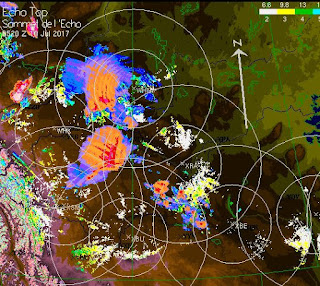 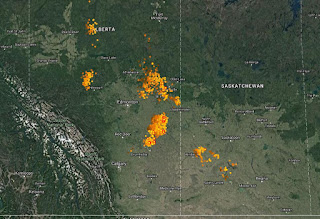 A day 2 moderate risk was issues in the early afternoon and that is expected to be expanded by morning for most areas of southern Saskatchewan on Monday afternoon. Extremely large hail with damaging wind gusts and tornadoes. Link to PASPC Current Outlook 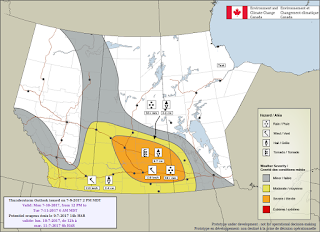 Many storm chasers are committed to converge on the area, such as the world record holder for tornado intercepts Roger Hill and his Silver Lining tour company. Also world famous storm chaser, Reed Timmer tweeted this:

We will continue to monitor this situation closely and posts will be frequent on our Facebook page.