Copious amounts of moisture across the southern prairies today combined with high temperatures will combine to mix in a little of everything, or lot of little things. Yesterday reports out of Okatoks, Alberta showed huge amounts of small hail covering the highways as snow plows had to be called in for what is quite a normal major hail event for the foothills as summer storm season hits its prime time of late June (pictures and tweets below). More of the same is forecast for today with an added bonus of a possibility of landspout tornadoes in southern Manitoba, especially in the Red River Valley. Strong pulse storms will begin early in the day with some becoming near supercellular size in areas south and east of Red Deer Alberta. Southern Saskatchewan could also see some storms reach severe levels with hail and heavy rain as the main factors. Here is a forecast map as drawn up at 7am: 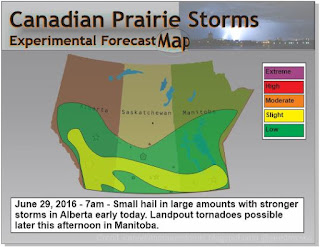 This map may be updated as needed later this afternoon. Photos and tweets from yesterday's amazing hail storms in the southern Alberta foothills: