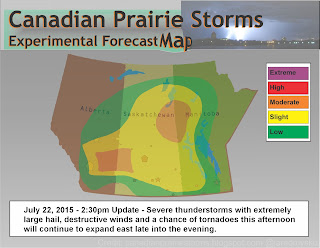 Just after noon time in Calgary and flurry of funnel cloud reports came in. As of right now, the main system has exited city of Calgary and is still growing and moving east. No confirmed tornado touch downs but many photos suggested it very close. Large hail and downpours were also reported.

Here is a zoomed in view of Calgary radar as of 1:50pm - Two dangerous areas, both seem to be rotating on radar. Northern circle is much wider/slower, while the southern circle is the funnel producers with much tighter/faster rotation and the main area to watch. South east corner of a east bound tornadic supercell is usually where it will produce tubes. 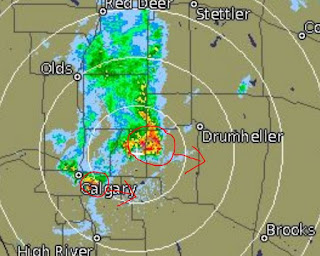 #yyc #abstorm this was above our house in Bridlewood today 😱😰😨 pic.twitter.com/jxTDblZ8YD
— Brittanie Duncan (@BrittanieDuncan) July 22, 2015


Tons more can be seen via the #abstorm feed on the right side of this page.

Storms are moving east and expected to continue all afternoon and late into the evening.