Conditions have increased the threat of very severe weather today, especially in east central Alberta where a risk of strong tornadoes exists. Storms will generally be larger, more powerful than yesterday due to the increase in temperatures and moisture. Storm motion will be very slow once again this evening as cells will be near stationary as the system creeps slightly east from the action last night. Tomorrow the shift will be much greater as it moves into parts of Saskatchewan. A full fledged moderate risk could be issued along the Saskatchewan/Montana border tomorrow as conditions gain even more energy. The main cliff hanger will be Wednesday evening as temperatures drop with the passing storms in southern Saskatchewan but then increases dramatically again Friday night in southern Manitoba. In fact, there is no foreseeable end to this pattern so storm season on the Canadian Prairies is now fully under way and will continue full strength until the end of the current cycle beginning of July. 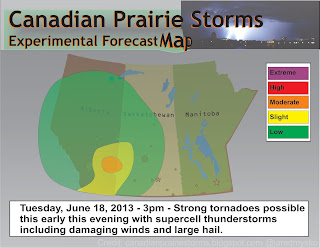