The next three days will be very active with severe thunderstorms starting from southern Alberta into Montana with a much bigger system in the Ohio Valley towards southern Ontario. Already a Moderate Risk has been issued for tomorrow by the Storm Prediction Center in Norman, Oklahoma covering areas of the states of Illinois, Indiana and Ohio.  A Slight Risk for southern Alberta, south west Saskatchewan and most of the state of Montana will mean serious storms with supercells and damaging tornadoes likely. Things will progress east each day with most activity staying close to the US border... likely very big storms, but nothing like we saw in Oklahoma a few weeks ago during those major historic outbreaks. The threat for danger increases though, especially Thursday in south west Saskatchewan with very hot winds aloft pushing in from Montana. To pin point areas of most danger here on the Canadian Prairies, Wednesday will be mostly between Lethbridge and Medicine Hat towards Cypress Hills, Thursday will be from Kindersley to Maple Creek and over to Assiniboia, Friday things will get going from Yorkton to Brandon in the east but still that is a few days away so conditions may shift either way. The way most storms have developed this spring suggests that south west Saskatchewan and south east Saskatchewan will get the most activity. The city of Regina has missed most every thunderstorm so far and that trend will continue until we get closer to July. So far this season, Saskatchewan has had two confirmed F-0 tornadoes and no damage reported as yet.

Here is the map: 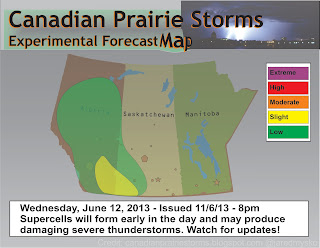 Please watch for public watches and warnings via local media, Environment Canada or The Weather Network, and...