Now that we are well into the month of June, "Storm Season" is fully underway on the Canadian Prairies. Almost daily severe thunderstorms in at least one of the three prairie provinces. Today is especially active as a short heat wave is being met with a sharp cold front in central Alberta. One tornado warning has already been issued in the area north west of Edmonton but has since expired. The risk for tornadoes increases into the evening with squall line likely forming over night which is expected to move into southern Saskatchewan on Sunday. Very large hail and damaging widespread winds are the main concern. Here is today's daily outlook map which we post here in the sidebar and on the Facebook Page 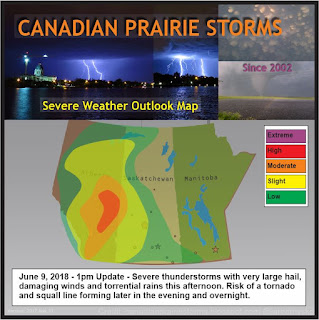 This will be updated again later tonight or early Sunday morning as the risk will shift mainly to south eastern Saskatchewan in the afternoon.

Here is the latest clip of the Echo Tops radar showing a massive complex of supercells with one in the south ringing in at over 50 thousand foot tops! 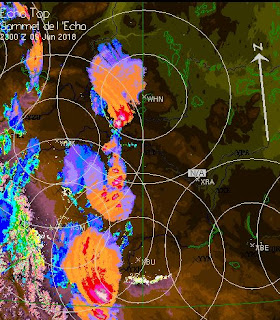 Oklahoma Storm Chaser Reed Timmer made the trip up north to try and catch a tornado and is posting on Facebook Live as you can see how it looks in this recorded video:


Many other chasers are out trying to get the best view and posting to the #abstorm hashtag on Twitter. You can see this live feed as well in the sidebar.


Also, here is a couple videos I forgot to post on the blog from May 30th storm in Regina. Most posts on the blog will be dedicated to specific events so follow the Facebook page and my Twitter for the most recent posts.


Thanks. Remember to have a Weather Radio tuned to "Alert" if in the risk areas.
Enjoy the weather and stay safe!